US Domestic & Global Interactions Against COVID-19 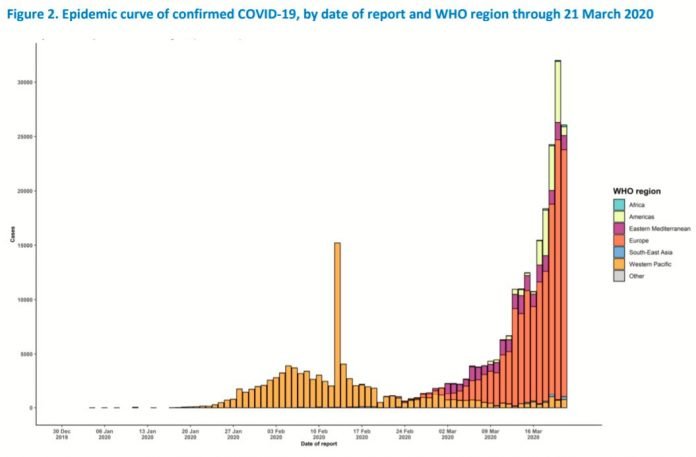 U.S. confirmed COVID-19 cases reached 15,219 cases. This puts the U.S. as the 5th most infected country in the world. In response to the pandemic, the federal government has dedicated massive budgets against the spread of COVID-19. All sectors of the government are joining together to enact more measures to help both domestically and globally affected people.

The U.S. is working to pass a massive stimulus package to blunt the economic effects of the coronavirus. The package failed to pass an initial procedural hurdle Sunday evening by a 47-47 vote. The motion needed the votes of at least 3/5 of the full Senate. Before the vote, Senate Majority Leader Mitch McConnell suggested the final bill was not yet ready, saying “discussions continue on the package.” Democratic senators, including Senate Minority Leader Chuck Schumer, are concerned the Republican plan will only aid large companies “with no protections for workers and virtually no oversight.” House Speaker Nancy Pelosi had objected to the first version pitched by McConnell, claiming it didn’t do enough to protect workers and gave too much to corporations. After this initial rejection, the bill is not likely to pass until later in the week.

In the education department, the federal government is offering forbearance to stop monthly payments. There is also 0% interest on student loans during this time.

The majority of domestic cases are being handled differently by each state and their governors. Other countries and individuals have reached out to the U.S. offering testing kits and masks. For example, Chinese billionaire and CEO of Alibaba, Jack Ma, tweeted images of 500,000 virus testing kits and 1 million masks set to arrive in the United States. Taiwanese Foreign Minister Joseph Wu announced Wednesday that the country plans to donate 100,000 masks to the United States on a weekly basis once its supplies are stable.

The following statement is from USAID regarding the U.S. efforts to curb the spread of COVID-19:

“The U.S. Government announced on March 2, a commitment of $37 million in financing from the Emergency Reserve Fund for Contagious Infectious Diseases at the U.S. Agency for International Development (USAID) for 25 countries affected by novel coronavirus COVID-19 or at high risk of its spread. The U.S. Government is providing these funds to the World Health Organization, other multilateral institutions, and programs led by USAID’s implementing partners. These are the first U.S. Government funds committed from the pledge of up to $100 million announced by the U.S. Department of State on February 7, 2020. Because an infectious-disease threat anywhere can be a threat everywhere, we call on other donors to contribute to the effort to combat COVID-19 as well.

A letter has been sent from President Trump to North Korea who seems to have accepted the contents positively. North Korea still denies any cases of COVID-19 within their borders, while many experts cast doubt on the statement.

The offer to help has not been accepted by Iran’s Supreme Leader Ayatollah Ali Khamenei, as of Sunday, March 22. Khamenei expressed concern that the U.S. developed COVID-19 as a weapon against Iran. He stated suspicions on the U.S. offering to aid Iran when their relations are not well, and the U.S. is in a crisis as well.

Colorado Times hopes that the U.S. will continue to help those within and outside of its borders. Please continue to stay healthy, positive, and informed during these times.