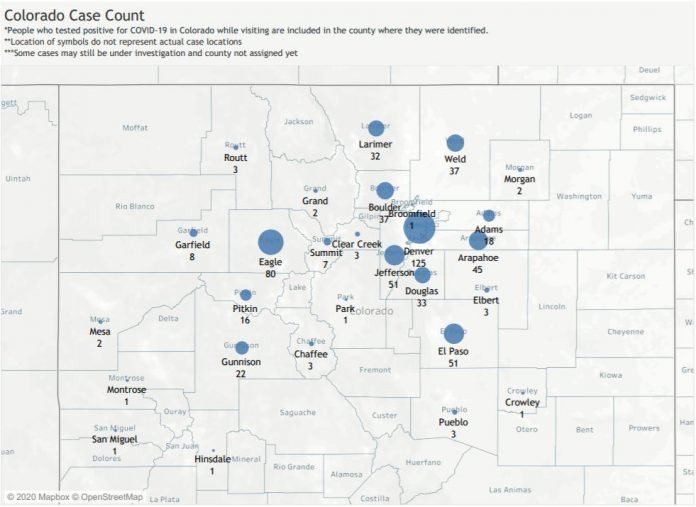 The Continuing Fight Against the Virus’s Spread

Another 886 tests were conducted on Saturday with 116 people testing positive for the novel coronavirus. This brings the number of confirmed cases in Colorado to 591 as of Sunday, March 22. 58 people are hospitalized after becoming infected and 6 have passed away. The state reported five outbreaks at residential and non-hospital health care facilities this Sunday. The locations and facility names have not been disclosed.

Since early March, Colorado has tested 5,436 potential cases, as of Sunday. Among those who tested positive Sunday is a health care worker in her 60s at Evans Army Community Hospital in Fort Carson and an El Paso County Sheriff’s Office deputy.

After an attorney who visited multiple courtrooms tested positive, the Lindsey-Flanigan Courthouse in Denver was closed Monday and Tuesday for cleaning. All hearings in Denver District Court scheduled for the week will be suspended, Second Judicial District Chief Judge Michael Martinez said in a statement. The court will use the week to figure out how to create “virtual courtrooms” where everyone can appear remotely in the future, according to the statement.

Although the disease is mild in most cases, it spreads easily. Many healthcare providers and experts fear that the hospitals will be unable to treat the high influx of patients. Colorado is not in a state of shelter-in-place, but all residents are recommended to stay home when possible.

Colorado Governor Jared Polis is reluctant to shut everything done due to possible economic and social repercussions. One percent of the state’s workforce filed for unemployment in the last week alone, while many of those who are still working are doing so from home.

Polis told reporters on March 18 that as the closure of these businesses drags on, he’ll look at some point at allowing them to open on a limited basis, with new standards to allow for appropriate social distancing.

“You can’t shut down everything forever,” he said.

However, measures are being taken to slow the virus’s spread. Ski resorts are shuttered; national parks closed. On Monday at noon, Estes Park will close all of its hotels, motels, and short-term rentals until April 17 — a decision also made by officials in Gunnison, Summit and San Miguel counties in the fight against the novel coronavirus.

Polis has also ordered the closure of additional businesses deemed “nonessential.” Nail salons, hair salons, spas, massage parlors, and tattoo shops must close until at least April 30, per his order.

The order was originally published Monday but updated on March 19. The initial version of it called for a 30-day closure of restaurants — delivery and take-out excepted — plus bars, theaters, gymnasiums, and casinos. The new expiration date of April 30 now applies to those facilities, too.

Polis has repeatedly stated that additional restrictions may be announced in the coming days, possibly including a shelter-in-place order in some or all Colorado counties. Colorado also hired 50 new nurses dedicated to help the state’s COVID-19 response.

With the measures being taken and individuals taking more care to prevent the spread of COVID-19, Colorado Times hopes we can continue to bring positive news during these hard times.