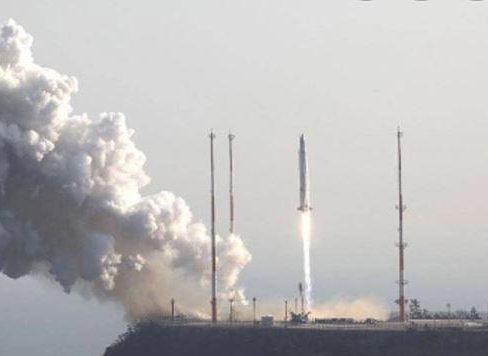 On Tuesday, South Korea has successfully conducted its satellite launch using a domestically developed rocket. The three-stage Nuri rocket placed a functioning “performance verification” satellite at a target altitude of 700 kilometers after its 4 p.m. liftoff from South Korea’s space launch center on a southern island. South Korea, which has the world’s 10th largest economy, is a major producer of semiconductors, smartphones and automobiles. Now, the country has officially became 7th nation in the world to have developed a space launch vehicle that can carry a satellite of more than 1 ton.

The 200 ton Nuri blasted off from the Naro Space Center and successfully placed a satellite into an orbit, reaching a major hisotircal milestone in the country’s space program. President Yoon Suk-yeol lauded the launch of the homegrown space rocket Nuri, saying South Korea has opned “a new path to space.”

“This is a result of overcoming tough challenges for over last 30 years. Now the people of the Republic of Korea, and the dreams and hopes of our young people will reach out to space,” he said after watching the launch from his office in Seoul. “As I said in my campaign pledge, the South Korean government will establish an aerospace agency and systematically support the aerospace industry,” he said.

In fact, South Korea is a relative latecomer to the global space development race. South Korea’s space development program has lagged behind that of Asian neighbors China, India and Japan. Since developing its first space rocket development mission in the early 1990s, it took Seoul nearly 30 years for Asia’s 4th largest economy to prove its capability to develop and launch a space vehicle carrying homegrown satellite. This milestone is expected to further the country’s space technology and boost its ambition to land on the moon by 2031.

Last but not least, this success marked a significant turning point for South Korea, as the entire process including manufacturing, design, testing and laucn were carried out with pure domestic technology. Avid tensions with North Korea, South Korea has finally boosted its growing aerospace ambition and demonstrated that it has key technologies needed to launch spy satellites and build larger missiles. North Korea did not immediately comment on Tuesday’s Nuri launch success.